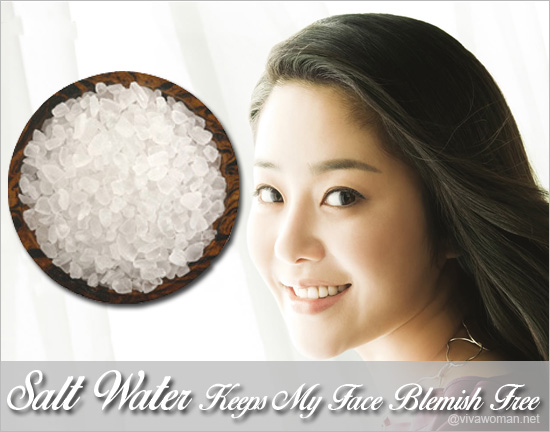 Go Hyun Jung, the highly acclaimed Korean actress who was also a runner up for Miss Korea in 1989, has always been admired for her youthful appearance. She shared many beauty tips in her skin care book titled Go Hyun-Jung’s Texture, which was a bestseller with 30,000 copies of the first edition all sold out in just two days of its launch in 2011. The book sold out so quickly because many were interested in her beauty secrets and one of her tips include using salt to treat breakouts. I did an online search on the topic and it appears that many have had success with this relatively unknown beauty secret.

According to Go Hyun Jung, breakouts can be treated naturally by washing affected areas with salted lukewarm water to sanitize the area and prevent it from worsening. I believe this to be true because the radical pH of the salt kills most common germs and many bacteria just can’t survive in high salt concentration environments. Hence, it is no surprise that salt has been used as a remedy, taken internally or applied topically, for thousands of years. An article in Science Tribune states that the antiseptic action of salt on the skin has been known for a very long time.

Scientific studies have now confirmed the effectiveness of salt therapy in several indications. The antiseptic and bactericidal qualities of dental salt (sea salt) help remove plaque which is a cause of gingivitis and caries. Salt is being increasingly used as support treatment for skin diseases. Chronically inflamed skin is treated with medical bath salt from the Dead Sea (d) or table salt. The salt peels off dandruff, reduces inflammation, itching and pain, and helps regenerate the skin. Salt-baths are frequently used to treat psoriasis, atopic dermatitis, chronic eczema as well as arthritis. Sometimes (as in psoriasis), this therapy is followed by ultraviolet light radiotherapy under strict medical control so that the combination of salt water and UV light does not expose patients to an increased risk of skin cancer.

The closest I’ve got to using salt water on my skin was to gargle the solution for mouth sores. This also clears out unhealthy bacteria and promotes good oral health. I’ve not actually used salt water to treat any skin related issues. But if you run a search on the Net, you’ll find quite a lot of acne sufferers sharing how a salt water spray has done wonders for their skin. These were two testimonies I’ve found on Reddit:

When I got my nose pierced I was given a salt water spray to help it heal. I would just spray it on the piercing, but the salt water would also get on my cheeks which sometimes break out. It made such a huge positive difference on the appearance of my skin (and would rapidly shrink any pimples) that I would use the spray even after my piercing healed. I never found the salt water to be too drying, but I opted to purchase other products after the bottle ran out.

Sea salt worked wonderfully on me. I was swimming with my friends at the ocean and all, maybe three-four hours. Note that the beach itself was a fairly clean one too. But when I finish my shower, I cannot feel nearly half of the pimples on my forehead. I was someone with pimples covered all over their forehead. Its one of those that disgust people. But sea salt in my case does work, I have no clue how but I am so glad I took that swim at the beach.

But before you go diving into the sea or washing your face with salt water, do note that the solution can be drying. While some people have said washing their face with salt water help them maintain clear skin, I definitely would not encourage you to wash yours with the solution daily. I’ll say use salt water as a spot treatment for your acne or pimples as and when needed. And yes, both table salt and sea salt works so you can just take your pick depending on your preference or what you have in your kitchen.

Eating too much salt can aggravate your acne

Previous Post: « What is clean eating and my 5 clean eating habits
Next Post: Jazz up outfit with a scarf and a yellow bag for work »