According to news from Mainichi, Japanese celebrity Miho Takagi has been named as the female celebrity that suits glasses the most in an annual survey by Seiko Optical Products.  Korean actor Bae Yong-joon took the male lead.

In the survey, reasons people gave for liking glasses included that they could change the look of their face and that they enjoyed matching their glasses with their clothes.  I suppose glasses can be used as a fashion accessory but most ladies really prefer to show off their beautiful peepers.  Which probably explain why I hardly see female celebrities in them.  For example, it was so hard to find Miho Takagi’s on the Net initally!

And unlike sunglasses, regular eyewear should be smallish to look chic.  In fact I was checking out this website on designer sunglasses and it looks like many international brands are carrying smaller frames and so my glasses isn’t out of date.

If you have to wear glasses, use simple eye makeup with eye shadow but avoid eyeliner as it could look much starker under lenses.  Mascara should be limited to a coat or two as any clumps or smudges will be much more obvious under the glasses.  Instead, focus on other parts of your face like your blush, lipstick and lipgloss to accentuate those features.

And one of the thing I’ve learnt about wearing glasses is that it’s not only the design of the frame, but also the weight.  Because a heavy frame can leave an ugly mark on your nose bridge and we certainly don’t need that at all. 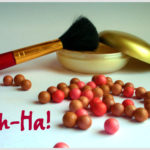 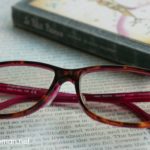 My new glasses have an SPF 25 & keep UV rays away