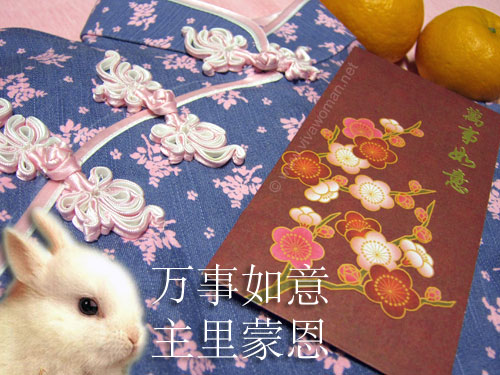 If you’re a Chinese, you must be celebrating Chinese New Year like me here, which is marked by new clothes, reunion dinners, lo hei, mandarin oranges and red packets. Because I was working till Tuesday, and I’ve been rather busy, I didn’t really have time to buy new clothes this year. But I do have some new pieces and one of them is a cheongsam that you see here. I’ve tried it on once and my hubby said it made me look older. I think the reason he said that is because it reminded me of my sister-in-laws who are always dressed in cheongsams during this festival. Well, I’ll be taking some pictures and I’ll post them up some time later and you tell me okay?

Eating all day long
Chinese New Year is really a time to eat, eat and eat. We had our reunion dinner at a shabu shabu place last evening and this morning, I woke up to prepare a sweet soup dish consisting of white fungus, dried longans, red dates and eggs. My husband is preparing some chicken for lunch and later, I’m heading to my mom’s place for dinner and meeting four extended families that will fill up three tables. And one of dishes that I’m look forward to is the Yu Sheng, which is a raw fish salad that one of my brothers will be whipping up. The tossing of Yu Sheng, commonly referred to as “lo hei”, is a common practice among the Chinese, symbolizing abundance and prosperity – the higher you toss the salad, the more abundance you’ll have. Anyway, my brother’s Yu Sheng is really good and so I usually do not order Yu Sheng during Chinese New Year when eating out as no restaurant can match his standard. And this is a picture I found of his Yu Sheng, taken during the 2009 Chinese New Year. 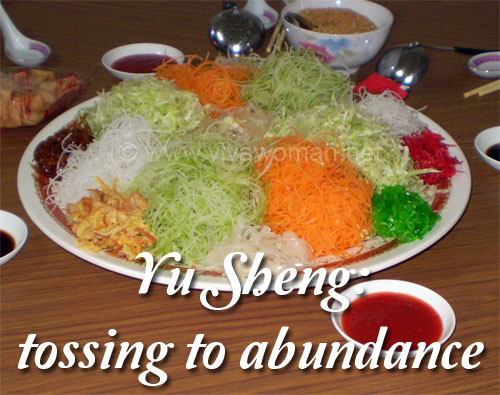 Any of you a rabbit here?