I have been doing a bit of research into oils after reading in a Chinese book that cleansing oils are drying for our skin. I haven’t been able to establish anything conclusive yet but I believe it really depends on the product formulation, as I’ve mentioned in an entry I wrote in May 2011 about cleansing oil causing skin problems.

However, something else turned up in the course of my digging around about oils. I realized that there is a need to correct a common recommended beauty tip to use castor oil as a makeup remover or around the eyes because I don’t think it’s a good idea. Why so?

Castor oil is too drying
First off, castor oil is popularly known to be an anti-toxin that draws out the impurities deep in our skin. This means that even though castor oil is an oil, it will help with the removal of the other oils because it really sinks deep into the skin pores and draw out the dirt and grime to the surface.

As such, it can cause our skin to become too imbalance, devoid of its natural lipids. In fact, although many have reported good results using castor oil in the oil cleansing method, more have mentioned that their skin condition took a turn for the worse after using too much castor oil in their cleansing. Many have also pointed out that castor oil is just too drying for their skin.

Skin around our eyes are too delicate
Granted, some of you will argue that the amount of castor oil can always be reduced in the cleansing oil mixture. Some of you will also say it really depends on skin types. I think these are all fair arguments. Someone with normal or oily skin may not experience any harm using castor oil at all.

But still, I don’t think it’s a good idea to use it around the eyes in any amount. And the reason is this: the skin around our eyes is ten times thinner than the skin on our face and hence, more sensitive and requires more care.

Temporary effects possible
While those of you who are using castor oil to remove makeup may find that you have no issues now, that doesn’t mean problems won’t creep up later. A lot of times, the damage doesn’t show up immediately but gets build up over a longer stretch. So since castor oil is widely known to dry out skin, I really advise against using it for the eye area. I mean, it’s really better to be safe than to be sorry later right?

As for those who suggest that castor oil around the eyes can help reduce fine lines or wrinkles, I have to say that while there could be exceptions, most effects are temporary. I believe all oils applied on your face will minimize the look of fine lines and as for wrinkles, I don’t think they can be eradicated all that easily with any oil.

A conjecture on cleansing oil
Personally, I even have some reservations about using cleansing oil and this is why I no longer use it on my face. However, like I’d mentioned, I think a lot depends on the formulation. Some are probably harmless but I’m just thinking if my eye area could look better had I not used cleansing oil around them at all in the past.

I know this is a conjecture but hey, I’m entitled to my opinion and I shouldn’t have to be stoned for saying what I think right? In any case, I’ve gone back to using cleansing cream and they work wonderfully for me, even for the times when I used eye makeup. But then again, I don’t use very heavy eye makeup so I have little grounds to complain. 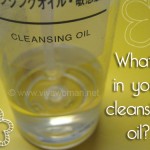 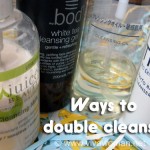