When should you throw out that nail polish? I have a question.  How long can we keep our nail polishes for?  I’m asking because I just cleaned my nail polish drawer and noticed that I have some nail polishes that are at least 5 years old!  OMG!  But the funny thing is, they’re still fine and I’m able to wear them.  I don’t know if it’s because these are OPI nail polishes and that’s why they last longer since the only thing I do is to keep them in a drawer away from direct sunlight.

Shelf life of two years or longer
I’ve read that nail polishes should be thrown out after two years but I don’t know.  I mean, if they still work well, surely we can still continue to use them since the polish won’t come into contact with our skin?  And in relation to this, while some nail polishes can last longer but some can turn bad quite quickly.  So is there a way to extend the shelf life of that bottle of nail polish?

Warm weather ruins nail polishes
In fact, a reader by the name of Vartika who lives in India with relatively warm weather wanted to know if she should be refrigerating her nail polishes so that they can last longer.   I only know that the high temperatures can cause polish to separate and the color to change.  But to keep them in the fridge?  Some said no, but a lot seem to be in favor.

Refrigerate for longer shelf life
But it seems that the experts are agreeing that nail polishes should be kept in the fridge for them to last longer.  According to Oprah.com, Suzi Weiss-Fischmann, executive vice president of OPI, claims that storing polish in the fridge will slow down the discoloration that happens as polish gets older.  In addition, she suggested keeping the bottles upright, because if a bottle falls on its side it’s harder to shake the pigments back together. Even the cosmetic chemist Mort Westman explains that refrigeration reduces solvent evaporation and pigment caking and settling.

Additional tips to keep nail polishes from drying
Well, I have never kept any of my nail polishes in the fridge.  Like I mentioned, they’re just kept in a cool dark place.  But I do make an effort to ensure that I wipe the edge of the bottle opening so that it’s easier to tighten the cap after each use.  In addition, I never shake my nail polishes to prevent bubbling but instead roll the bottle in between my palms to blend the color with the thinner.

Hmm…
Maybe I should keep my current faves, I’m Not Really A Waitress and Lincoln Park After Dark in the fridge so that they can last me longer? 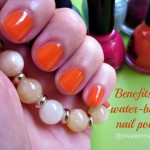 Nail it right with 10 benefits of water-based nail polishes 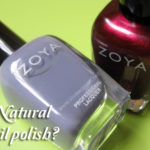 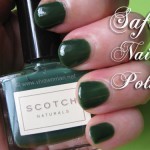 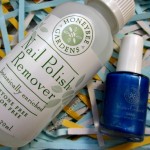